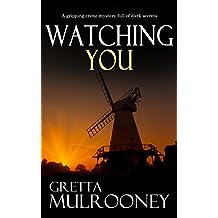 Watching you- Gretta Mulrooney- 4*
Thomas has started getting rather strange emails. Ones that are verging on being threatening. They started arriving almost two years to the day after his son was snatched from under his watch. His Grandfather Gabe is a character and a wealthy one at that, so employs Ty Swift a private investigator to find out more as the police are at a dead end. This is a very different story. Told from Swift’s perspective as well as the perpetrator, this is a mystery with a difference. We have no idea why Thomas and Gabe are being targeted or who it is likely to be. Swift has his own family issues and this provides a second background story line which I like as there is always more to the main character than just their “role”. A very descriptive engaging book that puts you right into the heart of the scene with a cleverly hidden perpetrator.


I voluntarily chose to read this ARC and all opinions in this review are my own and completely unbiased.
at June 20, 2017