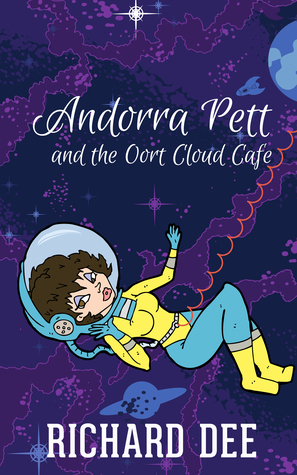 
Andi has landed on a mining station a week away from Mars.
She takes on the “ucky strike cafe” (the “L” fell off) - its previous owner having
disappeared leaving outstanding debts. Her business partner Cy is right behind
her. Much to her surprise they find the previous guy in the freezer - in a body
bag. Being on a different planet means there are rules about refuse and hence
they decide to leave him there having little choice in the matter. Andi wants to
find out more about a secret book that he had and who murdered him. This is
a wonderful, lighthearted read to make you smile. Characters that are well
portrayed and you take to easily. Descriptions are vivid and you can easily
picture “the planet” in your minds eye. An excellent plot line with a little
humour and even romance along the way. A highly enjoyable read.


A native of Brixham in Devon, Richard Dee's family left Devon when he was in his
teens and settled in Kent. Leaving school at 16 he briefly worked in a supermarket,
then went to sea and travelled the world in the Merchant Navy, qualifying as a Master
Mariner in 1986. Coming ashore to be with his growing family, he used his sea-going
knowledge in several jobs, including Marine Insurance Surveyor and Dockmaster at
Tilbury, before becoming a Port Control Officer in Sheerness and then at the Thames
Barrier in Woolwich. In 1994 he was head-hunted and offered a job as a Thames
Estuary Pilot. In 1999 he transferred to the Thames River Pilots, where he regularly
took vessels of all sizes through the Thames Barrier and upriver as far as H.M.S. Belfast
and through Tower Bridge. In all, he piloted over 3,500 vessels in a 22-year career with
the Port of London Authority. Richard was offered part time working in 2010, which
allowed him to return to live in Brixham, where he took up writing and blogging. He
retired in 2015, when he set up and ran a successful Organic bakery, supplying local
shops and cafés. The urge to write eventually overtook the urge to bake but Richard
still makes bread for friends and family. Richard is married with three adult children
and two grandchildren.


He can be found at www.richarddeescifi.co.uk