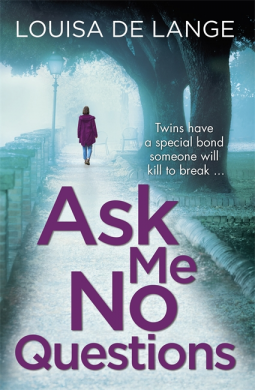 ASK ME NO QUESTIONS - Louisa de Lange -Thriller Suspense
A mother and father are murdered by their neighbour who was convinced that the father
was having an affair with his wife. The children of both families have always been close
being more like siblings. Fifteen years later, one of the dead parents twin girls is brutally
attacked. DS Kate Munro is on the case and wonders if the past has some meaning as
there is a distinct lack of suspects. The twins are identical and hence easily cause
confusion, however each leads a very different life and they haven’t spoken for over
fifteen years when their parents were shot. The three children, Harry, Theo and
Gabi have differing relationships to each other and things have changed since they
were children, something they never wanted to happen. Secrets and lies, pasts that
come back to haunt and threaten to tell the truth. Louisa give brilliant characters-
some you like, others I was not quite sure about. They have that realness and
possible perpetrators that air of mystery. I took to Kate- her steely determination
and dogged determination that things that are on the surface wasn’t necessarily
the truth and that unearthing the past was the key to the future.
A very well thought out plot and a page turner.
For more reviews please see my blog http://nickibookblog.blogspot.co.uk/

Author Biography Louisa de Lange studied Psychology at the University of Southampton and has lived in and around the city ever since. She works as a freelance copywriter and editor, and when she's not writing, she can be found pounding the streets in running shoes or swimming in muddy lakes. Ask Me No Questions is her second novel, and the first in the DS Kate Munro crime series. To find out more, you can follow her on Twitter @paperclipgirl. Market C haracter-driven police procedural and psychological drama for fans of C ara Hunter and Fiona Barton.