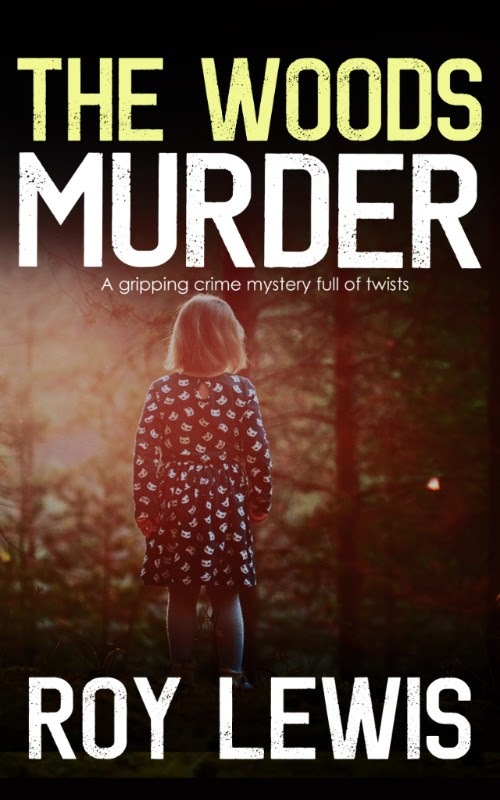 THE WOODS MURDER by Roy Lewis 6th Nov- Joffe
THIS BOOK WAS ORIGINALLY PUBLISHED AS “A SECRET SINGING.”
A young girl, Jenny,  was murdered a while ago and there are few leads in the case.
This is the 1960’s and the police and forensics are very different to how we perceive
them today. Cathy is an articled clerk in a solicitors office. Her mentor Charles is not
liked by many and he is known to be a womaniser however he is good to her and she
supports him. One day , by chance she overhears an argument he has with an unknown
man. When Charles is found dead the following week, she wonders if this could be
connected. Jenny’s father) blames Charles as he wouldn’t allow right of way over his
land and Jenny wouldn’t have been where she was had the right of way been
available. Inspector Crow now has his work but out and isn’t best pleased when Scotland
yard are brought in to assist. Assistance he could very well do without.
Roy is a wordsmith and at times this is like reading one of the classics, the writing being
of such quality and words that we tend not to use everyday. “for her mind was patterned
with doubt and incomprehension, a cicatriced amorphous mass criss crossed with
questions and uncertainty” - I had to look up cicatriced - the scar of a healed wound) .
That is not a criticism, more of a nod to the era in which this is set- a time of tradition
and not so flexible points of view as we have now. If you enjoy Morse, Endeavour and
Life on Mars or remember the 1960’s this could be right up your street.
A good old fashioned detective story with no fuss.
For more reviews please see my blog http://nickibookblog.blogspot.co.uk/

Looking for a classic murder mystery from an acclaimed crime writer?

Discover Inspector Crow of Scotland Yard. Enjoy a beautifully told story from a time before smart phones and DNA testing. Full of twists and turns, this will have you gripped from start to finish.

THIS BOOK WAS ORIGINALLY PUBLISHED AS “A SECRET SINGING.”

Nine-year-old Jenny Carson is brutally murdered in Kenton Wood on her way from school.

Then Charles Lendon is found stabbed to death with a skewer through his heart. He was a ruthless lawyer and something of a womaniser. Jenny’s father blamed him for her murder.

As the local police struggle, Inspector Crow is called in. Can he connect the two killings?

He discovers that several of those closest to Charles Lendon had good reason to hate him: his housekeeper lover, her unstable brother, even the boyfriend of his attractive young colleague Cathy Tennant.

This fast-paced mystery will have you enthralled from the start. Set in England in the late 1960s, this is the third book to feature Inspector John Crow. More coming soon.

DISCOVER YOUR NEXT FAVOURITE MYSTERY WRITER

Roy Lewis is one of the most critically acclaimed crime writers of his generation.

“Each Lewis seems to better the last. Here is an intriguing puzzle and likely police work and a fine picture of Northumbrian society and countryside” The Times

“A thorough, unpretentious and immensely solid piece of work with an interesting and likeable hero” Times Literary Supplement

THE DETECTIVE
Skeletally-built, mild-mannered Inspector John Crow is established in the Murder Squad in London and constantly meets hostility when he is called upon to work on murder cases in regional crime squads in Wales and the Midlands. He displays strong moral feelings, and a sensitivity which brings him into conflict with regional staff as he doggedly and successfully pursues the truth in cases where he is called in.


INSPECTOR CROW BOOKS
Book 1: A LOVER TOO MANY
Book 2: ERROR OF JUDGMENT
Book 3: THE WOODS MURDER

Roy Lewis Author Bio
Roy Lewis is a well-established crime writer with 60 novels to his name. He lives in the north of England where he sets many of his books. He is a former college principal and Inspector of Schools who now runs business training programmes and has business interests in Hong Kong, Singapore and Malaysia. He has three children - all of them lawyers.