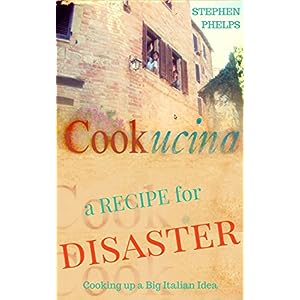 A Recipe For Disaster

A Recipe for Disaster is a cookbook, a travelogue and the companion to Cookucina, a six-part TV series available on Amazon Video, iTunes and Google Play - see www.cookucina.com .

It's also the entertaining journey of an Englishman struggling with the ups and downs of living in rural Italy. After giving up a successful career in television, Stephen found himself dragged back into a world he had happily given up when his neighbour, Lia, persuaded him to listen to her Big Idea – making a TV cookery series. But Lia speaks no English.

And Stephen’s partner, Tam, can't cook. So, much against Stephen's better judgement, the three of them embarked on a six-part series set among the rolling hills of the little-known, but spectacularly beautiful, Italian region of Le Marche. In the Cookucina TV series Lia teaches Tam to cook alla Marchigiana, while Tam translates. A Recipe for Disaster follows their many encounters with the real Italy – a world away from the picture-book ideal of summer holidays in Tuscany.

As the team try to construct a professional series with no funding they come to rely on the generosity of the Marchigiana people, while attempting to overcome the constant difficulties thrown up by those whose stubborn adherence to their age-old way of life is rooted in their beloved fields and woods. A Recipe for Disaster is a goldmine of simple yet delicious recipes, while peeling back the veneer of television professionalism and opening the door to a world of Italian surprise and delight.

A Recipe for Disaster comes with unique access to Cookucina, the final six-part TV series, so you can see for yourself how the team cracked their problems and (just about) held it all together in a blistering heatwave. Experience this contradictory world of vendettas and kind hearts through the laughter and frustrations of Stephen and the team, as you follow A Recipe for Disaster slowly coming to its surprising fruition.


How hard can it be to make  a TV programme when you are a producer/director? OK, do it in a different country, the “chef” doesn’t speak much, if any, English, you have no crew, no money  and you don’t speak much of the lingo either and your target audience is English. You get the gist! This is written from the heart and is a wonderful , highly enjoyable read. There are some pictures (which explain a few things) and some recipes which are very appealing. an tempting. Think “Summer in Provence” but Italy and cooking. The recipes are what I would fondly call “bucket cookery”- a tablespoon of this, a handful of that and a “glass” of brandy- shot or tumbler? Recipes as  they would be traditionally-ie. left to the cook to decide. I made some of them and the chocolate tart was to die for, A lighthearted read for anyone who is into cooking, Italy or just a little bit of escapism . Just off to make another one…..


I voluntarily chose to read this ARC and all opinions in this review are my own and completely unbiased
at November 01, 2017