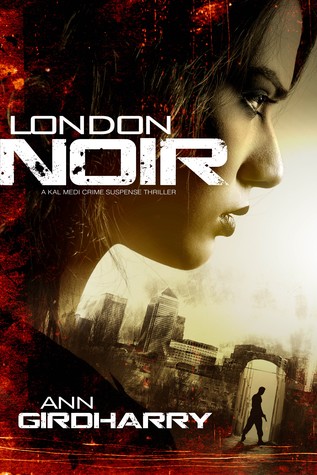 Free for 48 hours- 1st November 2017
London Noir
Memory loss, nightmares, the urge to kill – Sophie has it all.Is it really Post Traumatic Stress Disorder? Or something more sinister? Kal is about to find out…After a near-fatal road accident, Kal helps Sophie, a young girl in trouble.The girl’s friends are being murdered one by one. Why? And who by?Kal must kick start herself out of her downward spiral to save the young stranger.But Kal is in the grip of the London Cartel, and is someone after the girl, or is the girl after someone?
Purchase London Noir on Kindle
Purchase London Noir in Paperback
My review:
Kal is a photojournalist and amateur sleuth. She meets Sophie when she almost knocks her over in her car. Somehow she connects to her and offers her refuge. She then tracks her to where she works and in the process finds a man looking for her. Soon there is a murder and Sophie is scared for her life and appears to be suffering from PTSD. Another friend of Sophie’s is then killed.  What has happened in her past and why has Penny and the others been murdered? A well written piece centred around women. A woman with a last and a friend she sympathises with- perhaps for good reason. This is the second in the series and is a standalone read (I haven’t read the first one) although as others have said there are things that the reader may understand better having read the first one. Strong characters, an interesting plot and a lead character that I am sure we will hear more from. I voluntarily chose to read this ARC and all opinions in this review are my own and completely unbiased.


Author Bio –
Ann Girdharry is a British crime suspense thriller author.
A trained psychotherapist, she worked for many years as a manager in the not-for-profit sector, for agencies working with carers, vulnerable older people, survivors of abuse, and victims of racial attacks.
She currently lives in Montpellier, France with her husband and two children.
Her debut novel, GOOD GIRL BAD GIRL, is an ERIC HOFFER BOOK AWARD Finalist 2017.
Her second crime suspense thriller, LONDON NOIR, will be published October 2017.
She is also author of Chilling Tales of the Unexpected Short Reads.
Author Links
Website www.girdharry.com
Facebook https://www.facebook.com/AnnGirdharry
Goodreads www.goodreads.com/AnnGirdharry