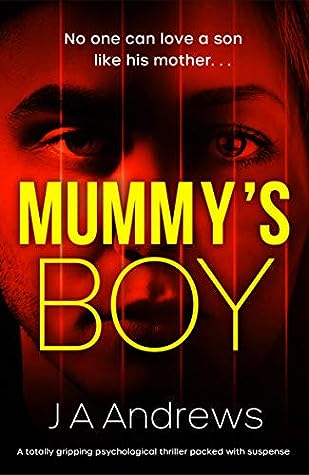 
Trish lives with her husband Thomas and is celebrating their son Andrew’s birthday.
She has made a cake (but slightly burnt it) and yet again is having “just a little drink
to take the edge off”.  Patricia herself had a troubled childhood with a cruel mother
and a father that didn’t care and she has always been determined that her son
wouldn't be brought up the same way. She sees herself as evil as that's what her
mother always told her and that she wouldn't amount to anything and no one
would want her. We get glimpses of Andrew as a child, some odd goings on and
Patricia as a very caring albeit rather overbearing, controlling mother. Andrew
walked out of their lives three years beforehand without a note or clue as to
where he was going. There was a search for him and he was reported missing
but absolutely nothing has come to light. We also get occasional chapters from
“The Watcher” who knows the family well.  This is rather a dark tale at times
and anyone who has had a controlling parent may find it bringing back memories.
That said I admired Andrew for what he did (I'm not giving anything away by
saying that) and only wish that I too had made that step. An interesting read
and a clever plot written very well.

No one can love a son like his mother…
Patricia Mullner is trapped in a nightmare no parent should ever experience. Three years ago, 17-year-old son Andrew vanished without trace. There was no note, no goodbye and no body has ever been found, and now her days are spent in a fog of heartache and alcohol, crying to husband Thomas about their lost boy.
But Patricia is more than just a grieving mother, and as Andrew’s disappearance starts to unravel the perfect family she’s built with Thomas, it seems that the actions of her past may be back to haunt her.
Because someone is watching from the shadows – someone who knows exactly what Patricia is hiding. Someone who will stop at nothing to take revenge – and might just hold the key to Andrew’s disappearance…
An absolutely gripping psychological thriller with a shocking twist in the tale. Readers of My Lovely Wife, KL Slater and B.A. Paris will not be able to put this one down. JA Andrews is an author of dark psychological thrillers with books published by Hera. Mummy’s Boy, the 2020 debut, is available to pre-order now before release on April 1st 2020.
Also a member of the Crime Writers Association, and can be found online in a few places:
Twitter: @JasonA1980
Website: jasona.co.uk 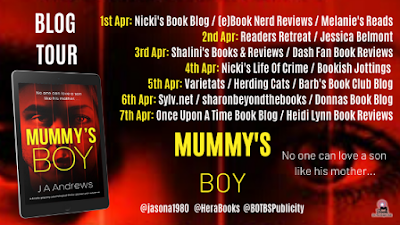