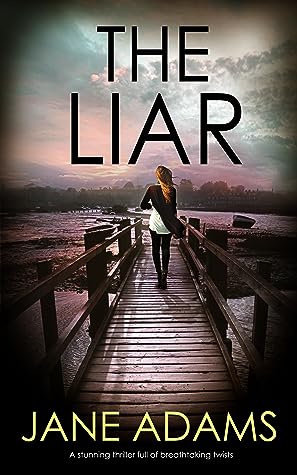 The Liar- Jane Adams- Crime
Ex DI John Tyler has met Martha- a distant cousin who has come to the area to trace
her family. when she is found stabbed in her  B&B room it is rather odd to say the
least. The previous night John saw the large dog who has been terrorizing the village
and whom most thought was imagination. Are the two connected? Detective Mike
Croft who knew John from his time on the force is leading the case. It appears that
Martha isn’t her real name and John is doing his best to sort out family history which
may help the case along as no one knows where Martha fit in to the family. I
enjoyed this. It’s that much more than a crime book. Because of John and his family
link it is much more personal which comes across well and makes it a mystery
within a crime if that makes sense. I liked John and Mike and Maria -Mike’s wife.
Again it gives that personal touch and interest without too much filler which
some books appear to have just for the sake of it. A highly enjoyable read that
is more than just a crime book
For more reviews please see my blog http://nickibookblog.blogspot.co.uk/

THE LIAR (Detective Mike Croft #4) by Jane Adams DISCOVER A BRILLIANTLY GRIPPING CRIME THRILLER FROM A BEST-SELLING AUTHOR DETECTIVE INSPECTOR MIKE CROFT RETURNS TO THE GREENWAY TO FACE HIS MOST
DIFFICULT CASE YET A BODY ON THE BEACH. In the hot, dry heat of high summer, Martha Toolin is found stabbed to death. She was a
stranger to the area and had been seen arguing with a teenage boy. BUT SHE IS A LIAR. Detective Mike Croft is called into investigate and quickly discovers that the victim was not
who she says she was. She was a con artist who exploited the vulnerable and elderly.
Even her name is false. EVERYONE WAS TAKEN IN BY HER. EVEN THE POLICE. The number of suspects who wanted her dead begins to multiply. Who was she and what
did she want with Mike Croft’s friend, former police detective John Tynan? SOMEONE WILL KILL AGAIN TO PROTECT LONG-BURIED SECRETS. And then another body is found on the beach . . . THE LIAR is a stunning psychological crime thriller which you won’t want to put down. Perfect for fans of Kimberley Chambers, Damien Boyd, Rachel Abbott, Patricia Gibney or
Mark Billingham. Praise for JANE ADAMS, author of the sensational best seller THE GREENWAY. “Few debut novels achieve this level of suspense. The Greenway lingered in my mind for
days. It takes the psychological suspense novel into new realms of mystery.” Val McDermid
, Manchester Evening News “A haunting debut.” Minette Walters “Compellingly told and rich with psychological insight.” Independent “Nail-biting stuff.” Ms London “An assured first novel, with a strong cast and a plot which twists and turns without a
glitch.” Yorkshire Evening Post DETECTIVE MIKE CROFT SERIES Book 1: THE GREENWAY Book 2: THE SECRETS Book 3: THEIR FINAL MOMENTS Book 4: THE LIAR

Jane Adams Author Bio Why do I write? Like most writers, it's a kind of compulsion. The stories are there and I have to try and grab
hold of them and pin them onto the page. Most of the time, I enjoy the process; sometimes
, I'd rather be doing just about anything else, up to and including the ironing - and I hate ironing. I started writing when my youngest child went to school. I was incredibly lucky and my first
novel, The Greenway,​​​​​​​​​​ was picked up by Macmillan in 1994 and published in 1995. I currently write two series; Naomi Blake and Rina Martin. Rina was a character I'd had
in mind for years before committing her to paper. An elderly, ex thespian who had played
the part of a popular TV detective, she had retired to the seaside and bought a boarding
house for other ex performers. Rina's feisty, no nonsense character is, I suppose, based
on the rather powerful and opinionated ladies I grew up surrounded by - mother, teachers
in the all girls school I attended, aunts and pseudo aunts, all of whom had opinions about
everything and made sure these were unstintingly shared. Naomi Blake, on the other hand, was the brainchild of my late agent, Bob Tanner at
International Scripts. 'You should write a blind detective,' he said ' and she needs a big
, black guidedog, called Napoleon'. I thought it was a daft idea, and told him so. I just couldn't see how to do it. But, like a
lot of seemingly daft ideas, this one wormed its was into my brain and I realised he was
right. It could work and so, the Naomi Blake series came into being. ​I have always written in other genres too, short stories in the SF, Fantasy and Gothic
Horror genre, and am working on longer projects when time allows. I also teach Creative
Writing and have had the great priviligde of being a Royal Literary Fund Fellow at three
different universities. 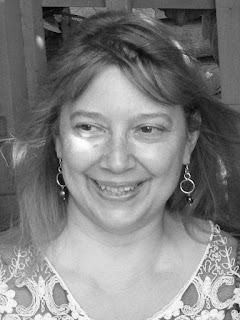 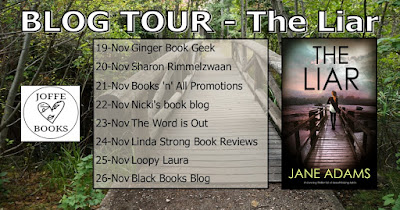