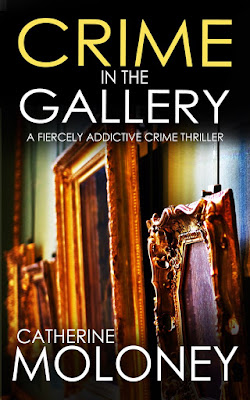 Crime in the Gallery- Catherine Moloney  Crime
When Gemma a trainee security guard is asked to take something to the walk in freezer
when on duty at the art museum, the last thing she expects to find when she opens the
door is a body. DI Markham and DS Noakes are on the case and Noakes especially is
having somewhat of an education ( so was I -I learnt what Aediculae are !) Years
previously a small boy had disappeared in the gallery never to be found. The dead
victim Helen had told one of her friends that she was onto solving a mystery but
wouldn’t divulge what until all the parts had been solved. Could the two be linked?
I liked the interaction between Noiakes and Markham. One a real down to earth
gritty type and the other with an interest in the arts showing off his education in
a nice way. A murder with twists and turns along the way and interesting characters.
A slightly longer book than most of this type which didn’t detract at all as there
was plenty going on in every chapter. An interesting read, a clever premise
and one with wonderful characters in the two lead roles. (although one of a series
this does stand alone)
An enjoyable read on a rainy day.
For more reviews please see my blog http://nickibookblog.blogspot.co.uk/

Crime in the Gallery (Detective Markham book 6) A TIGHTLY-PLOTTED CRIME THRILLER WITH GREAT CHARACTERS DETECTIVE MARKHAM RACES TO UNCOVER WHO IS PRACTICING THE ART OF MURDER Esteemed curator Helen Melville is found murdered in Bromgrove Art Gallery ⁠— frozen to death in the textiles conservation freezer. She had discovered something troubling in the gallery archives shortly beforehand, but her secret died with her. Or did it? Her murder is just the beginning. Detective Markham and his team scramble to keep ahead of rumours that the murder is linked to a tragic cold case. Is someone seeking revenge for an unsolved child abduction at the gallery over sixty years ago? The brutality escalates. No one is safe in the quiet picture halls. Markham's investigation reveals a sordid truth. Bromgrove’s temple of culture is awash with bitter rivalries and festering vendettas. WHO ELSE WILL HAVE A BRUSH WITH DEATH? Perfect for fans of PD James, Ruth Rendell, Ann Cleeves or Angela Marsons. DISCOVER A BRILLIANT NEW BRITISH CRIME MYSTERY SERIES The Detectives DI GILBERT (‘GIL’) MARKHAM DI Markham is a startlingly talented detective rising through the ranks of Bromgrove CID. He is distant and austere — the product of a profoundly difficult childhood — but has a natural magnetism which inspires loyalty. He clashes with his slippery boss, DCI Sidney, who prioritises the force’s public image. DS GEORGE (‘NOAKESY’) NOAKES DS Noakes is a slobbish, uncouth and outspoken Yorkshireman, an object of despair to his superiors. He is, however, also a man of hidden depths, with a sensitive streak and a secret flair for ballroom dancing. Markham sees through his philistinism and they form an unstoppable partnership. DETECTIVE INSPECTOR GILBERT MARKHAM SERIES Book 1: CRIME IN THE CHOIR Book 2: CRIME IN THE SCHOOL Book 3: CRIME IN THE CONVENT Book 4: CRIME IN THE HOSPITAL Book 5: CRIME IN THE BALLET Book 6: CRIME IN THE GALLERY More books coming soon. Join the Joffe Books mailing list for updates.

Catherine Moloney Author Bio Catherine Moloney is a Liverpool writer of Irish-American heritage. After graduating in Jurisprudence from Jesus College (University of Oxford), she was called to the Bar at Gray's Inn. Despite qualifying as a barrister, her first love was English; this led to a PhD in English Literature at Birkbeck College (University of London). In her academic career, she lectured and published widely on the subject of tuberculosis and nineteenth-century literature, but somehow managed to avoid contracting galloping hypochondria and turned her attention to crime fiction.