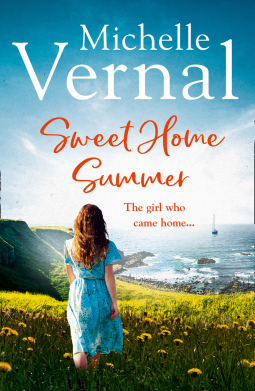 Sweet home Summer- Michelle Vernal- 4*
Isla is back home in New Zealand having left her job and taken time in California on
the way. She is living with her grandmother which does them both a favour as the
elderly lady fell a while ago and no one was around. At times Isla remembers her
past life and loves and time at a sanctuary along the way. Her old flame Ben has a
new girlfriend and she thinks about what could have been. She begins to put down
roots and life begins to flourish. (I did have to look up what a Neenish slice was, mind!).
A story of life, of chances and of making the most of what we have around us and
maybe don’t always appreciate. I took to Isla although it did take me a few chapters
to get into this book. Once I did it was a cozy read with a smile along the way that
I thoroughly enjoyed.
For more reviews please see my blog http://nickibookblog.blogspot.co.uk/


Isla Brookes was terrified of leading a little life in the small New Zealand town where
she was born and where her gran and mum were also born and bred. To escape their fate,
she breaks it off with her teenage sweetheart and runs away to London. She’s spent
the last ten years climbing the interior design career ladder and meeting the wrong kind
of man until one day she wakes up and wonders what it’s all been for. Leaving her
latest unsuitable man and job for dust Isla winds up sitting on a beanbag in therapy
at a Californian retreat, where she realises it’s time to go home.


They breed em tough on New Zealand’s West Coast. A fact Isla’s grandmother,
Bridget prides herself on. Her heart was broken once, and she won’t let it happen
again, but now ever since her husband passed away, someone’s been sending her
Valentine’s Day cards.


When the dance hall, the scene for this heartbreak, falls into decline, Bridget decides
the link to her first love must be restored even if the events of long ago can’t be put
right. She’s never heard of dating apps, so in a nod to her Irish ancestry, she decides
to hold a fundraising Matchmaker Festival.


Then Rohan Sullivan blows into town on a strange wind offering his services as a
bona fide matchmaker; suddenly it’s time for both women to remedy the mistakes
of their past.


Hello, my name is Michelle Vernal, and by way of introduction, I’m Mum to Josh and
Daniel and am married to the super supportive Paul. We live in the garden city of
Christchurch, New Zealand with our three-legged, black cat called Blue. BC
(before children) Paul and I lived and worked in Ireland, the experiences we
had there have flavoured my books.


I’ve always written, but it was only after my first son was born that I decided to attend
a creative writing course at Canterbury University. Oh the guilt dropping him at
pre-school so I could learn the basics of story writing, but oh the joy of having
conversation to contribute other than the price of nappies that week!  The first
piece I ever penned post course was published by a New Zealand parenting
magazine. I went on to write humorous; opinion styled pieces of my take on
parenting, but when the necessity for being politically correct got too much,
I set myself the challenge of writing a novel. Six books later and a publishing
deal with Harper Impulse here I am. These days I write for a lifestyle magazine
and my latest book Sweet Home Summer has just been released by Harper
Impulse.